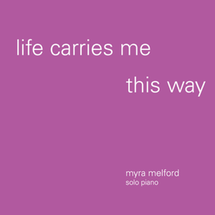 Life Carries Me This Way 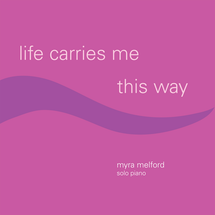 Life Carries Me This Way (re-release)

Melford is an explosive player, a virtuoso who shocks and soothes, and who can make the piano stand up and do things it doesn't seem to have been designed for.

On her debut solo-piano release, 2013’s Life Carries Me This Way, Myra Melford proved that her stunning gifts as a composer, improviser and conceptualist aren’t exclusive to her work as a bandleader and collaborator. Away from the profoundly engaged dialogues that have marked her many acclaimed bands—among them Snowy Egret, Tiger Trio and Trio M—Melford set up a series of inward-looking conversations exploring a gamut of expression. Gorgeous melodies coalesced with stirring dissonances; airy, nomadic lines fit within and around staunchly rhythmic chords; and spontaneously created music blended seamlessly with notated sounds. (In this particular case, notation meant Melford’s own inspired writing alongside the playfully dynamic visual art of Don Reich.)

Since the release of that album—about which JazzTimes wrote, “Partaking in Life Carries Me This Way reinforces the meaning of the word delightful”—Melford has expanded her power, scope and depth as a solo pianist in concert. A captivatingly physical presence onstage, she remakes selections from her recordings each night, in addition to interpreting compositions by such heroes as the consummate jazz modernist Andrew Hill and the nonpareil blues pianist Otis Spann. (Her take on old-school Chicago blues language, at once daring and reverent, is thrilling to behold.) But it’s between those signposts, where Melford adds segues via free improvisation, that her insight and finesse truly come into focus. Tinged with key influences like Cecil Taylor and her mentor Don Pullen, this free playing conveys her hard-earned signature voice—its prickly textures and poignant meditations, its kinetic thrust and patient atmospheres. Or to put it more directly, as the New York Times did, Melford is “a fearless pianist.”